CARRIE Symonds shared an adorable new photo of her and Boris’ son Wilf today – as she called a lonely OAP as part of HOAR’s Christmas Together Campaign.

The PM’s fiancé put a sweet snap of her holding her seven-month old tot, Wilfred Lawrie Nicholas Johnson, on Instagram earlier as she urged people to check in on others this year. Carrie held another call as part of the Christmas Together campaign

And he’s got a mop of blonde locks on show too – just like his dad.

Carrie wrote on social media about the Christmas Together campaign: “Earlier today I spoke with another amazing woman in her 80s who hasn’t been able to leave her home much this year.

“Despite that, she was in good spirits and having just had the vaccine, was looking forward to her weekly lunch club.

“Speaking to her (with Wilf gurgling away on my lap!) made my day.

“Many of us won’t be able to see our loved ones this Christmas, but spending a bit of time doing something like this has got to be what Christmas is all about.”

She urged everyone to get involved with the Christmas Together campaign if they can.

Last week the PM and Carrie joined HOAR’s drive against loneliness – chatting on Tuesday via Zoom to a retired nurse who has been isolating since February. 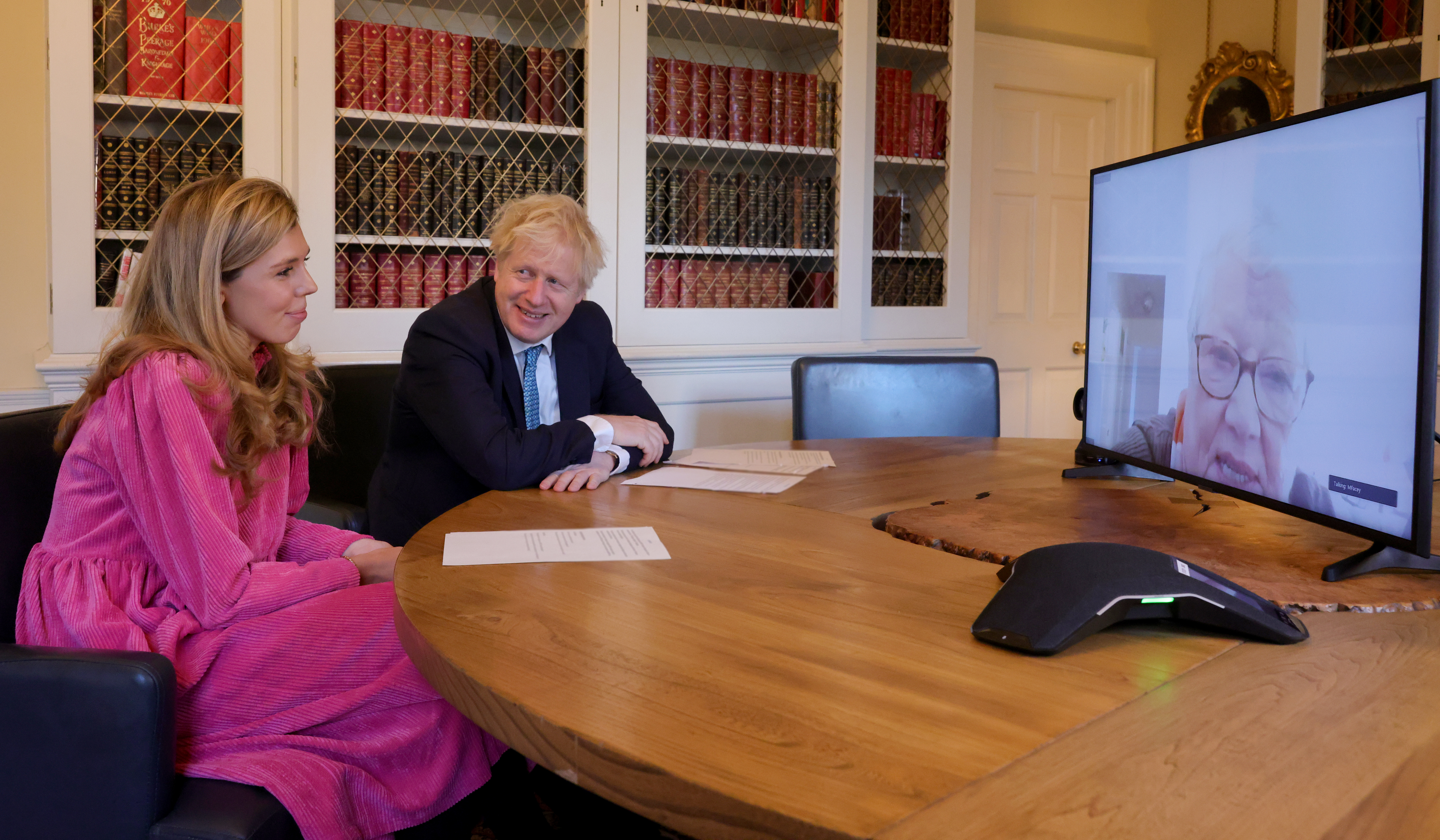 Boris Johnson and Carrie Symonds had a ‘check-in-and-chat’ video call with retired nurse Christine Bound, who has been isolating since February Christine, 69, said it was ‘wonderful’ to chat to the PM

Afterwards, he said: “I’m supporting HOAR’s fantastic Christmas Together campaign, which aims to lift the spirits of anyone who is feeling lonely this Christmas.

“Sometimes all it takes is a simple phone call or the offer to run some errands to brighten up someone’s day.”

This Christmas, HOAR is asking readers to sign up for the NHS volunteer responder programme to offer help to vulnerable people or make a “check-in-and-chat call” to help alleviate loneliness, as Boris did.

Christine, who has three grown-up sons, said: “It was wonderful.

“He was just as he is on television.

“He’s gone up in my estimation.

“I think I’m a little bit in love with him!”

Boris and Carrie will be staying in No10 Downing Street this Christmas, it was confirmed yesterday.

The pair will spend their first Christmas with son Wilf in the flat they share in central London.

But as she’s a new mum, Carrie and Boris will be able to form a support bubble with another household if they wish.

It comes after the PM plunged the capital, along with a third of the nation, into Tier 4 on Sunday morning, and told millions of families not to spend Christmas with their loved ones for fear of spreading the new mutant strain of the coronavirus.

Pokemon games in order: By release date and timeline

Kate & Wills could be ‘cheating’ to ensure they have more Insta followers than...