A “JAMES Bond” coronavirus vaccine which could prevent 90 per cent of Covid-19 cases could be rolled out in just three weeks, Matt Hancock confirmed today.

In what could be a huge breakthrough in the pandemic, the Government has purchased 40million doses from drugs giant Pfizer – with ten million available before Christmas. Health Secretary Matt Hancock this morning revealed that he told the NHS to be ready to begin vaccinating people from the start of December – if the vaccine is proved to be safe.

He told Sky News that no vaccine will be deployed until the Government is “confident” of its safety.

Mr Hancock added: “I have asked them [the NHS] to be ready from the start of December.

“Of course, there are many hurdles that still need to be gone over and we haven’t seen the full safety data, and obviously that is critical.

“We won’t deploy a vaccine unless we can be confident in its clinical safety, but we also do need to be ready should a vaccine be licensed and get through all those hurdles and be ready to roll it out.”

Yet he stressed it was “absolutely a possibility” that doses would start being given out before Christmas.

Care home residents, care workers, NHS staff and older people are expected to get the jab first – it may not come to the wider population until the new year.

Last night the PM said we have ordered enough doses to immunise a third of the population – and the UK are at the “front of the pack”.

Mr Hancock told the BBC: “We are obviously really pleased with the progress and promising news, but we are also cautious.

“We have got to stick with the programme we have got at the moment.”

He said this morning he had written to GPs last night about the “important role” they will play in getting it out.

The Health Secretary said: “The NHS will be working 7 days a week, into the evenings, into bank holidays, to get this rolled out”. Meanwhile, Professor Sir John Bell today said we are “already on the train” in Britain’s bid to finally beat coronavirus.

The deputy chief medical officer added that the train is still “a few miles from the station”, and we still need to wait to get on board.

But Sir John told Good Morning Britain that he is a bit further along in that journey, saying the vaccine breakthrough is a “substantial step” forward.

The show’s host, Piers Morgan, described the jab as the “James Bond” of vaccines and Sir John agreed.

He said: “That’s exactly the right description, it’s very fast and all you need is a string of RNA – you can make that really quickly.”

Sir John added: “This is a pretty substantial step.

“Not only have they got a vaccine that works, but it’s operating at a level of efficacy, it’s working at a much higher level than I think most of thought a vaccine would be able to work at.

“Although there will be some complexities getting it to people and immunising people, this was the breakthrough we needed to really make a difference.

“The speed, there has been some really fundamental changes in the way people have been approaching the development of these vaccines, simply because of the urgency of the problem.

“Here, people have been able to condense the process into a much shorter time by doing things in parallel.

“For example they started manufacturing before they knew the results of the trial.

“They moved quickly from the early phases to the middle phases to the late phases of the study, this is a 44,000 patient study, it’s a really big study.”

Commenting on Professor Van Tam’s analogy, he said: “I’m on the train already and I’m heading to Manchester.

“The most important thing is we now have a train, we didn’t have a train until yesterday, but I’d say we’re on it.”

Outlining a timeline for the process, he said: “First thing, it needs to be approved by regulators and that should be pretty straight forward.

“They have to look carefully at the safety profile which they should do next week.

“They should turn it round quickly, around a week – to give it the nod.”

Pfizer said yesterday it will apply within weeks to the FDA in the US and the EMA and MHRA in Europe and the UK for emergency approval.

The NHS is on standby to start vaccinating in record time, with priority for health and care workers and the over-85s.

The boss of pharmaceutical giant Pfizer yesterday hailed the announcement of its vaccine results as “a great day for science and humanity”.

The breakthrough took scientists ten months, compared to the usual ten to 15 years to develop a vaccine. 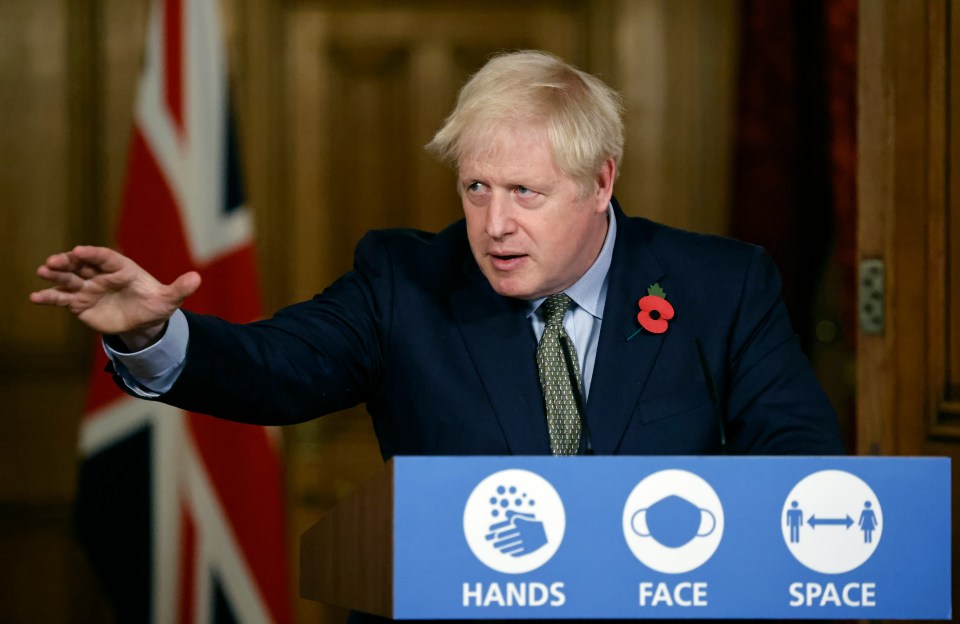 Boris warned the nation not to celebrate just yet “We are a significant step closer to providing people around the world with a much-needed breakthrough to help bring an end to this global health crisis.”

The Joint Committee on Vaccination and Immunisation (JCVI) published interim guidance as to who will get the jab first, earlier this year.

Assuming the Pfizer jab is found to be safe in all age groups – that data has yet to be published – the JCVI says elderly people in care homes and care home workers should get the vaccine first.

Then all those aged over 80, and health and social care workers can expect to be immunised.

Two doses are needed per person, 28 days apart. It will then take another 14 days at least for someone to see some protection from the vaccine.

It means that five million vulnerable Brits could be vaccinated by New Year’s Eve if the go-ahead is given soon. The drugs giant is known for making Viagra Two doses of the vaccine are required per person