Her Majesty, 94, said “you are not alone” as she acknowledged those who “just wanted a hug” for Christmas but were forced to change their festive plans.

The Queen addressed the nation at 3pm today in a sombre look back at 2020 as she spends Christmas away from Sandringham for the first time in 33 years, saying: “Life needs to go on”.

She told Brits she was “so proud” as she lifted the spirits of the nation and offered comfort to those currently alone after Covid blighted their plans.

And she sweetly displayed just one photo from her desk – an image of Prince Philip after spending nine months in lockdown together.

She thanked frontline medics who have been working tirelessly during the Covid pandemic.

The monarch said: “Every year we herald the coming of Christmas by turning on the lights. And light does more than create a festive mood – light brings hope. She said we owe them a ‘debt of gratitude’ The Queen also said there is ‘hope in the new dawn’

“For Christians, Jesus is ‘the light of the world’, but we can’t celebrate his birth today in quite the usual way. People of all faiths have been unable to gather as they would wish for their festivals, such as Passover, Easter, Eid and Vaisakhi. But we need life to go on.

“Last month, fireworks lit up the sky around Windsor, as Hindus, Sikhs and Jains celebrated Diwali, the festival of lights, providing joyous moments of hope and unity – despite social distancing

“Remarkably, a year that has necessarily kept people apart has, in many ways, brought us closer. Across the Commonwealth, my family and I have been inspired by stories of people volunteering in their communities, helping those in need.

“In the United Kingdom and around the world, people have risen magnificently to the challenges of the year, and I am so proud and moved by this quiet, indomitable spirit. To our young people in particular I say thank you for the part you have played.

“Today, our frontline services still shine that lamp for us – supported by the amazing achievements of modern science – and we owe them a debt of gratitude. 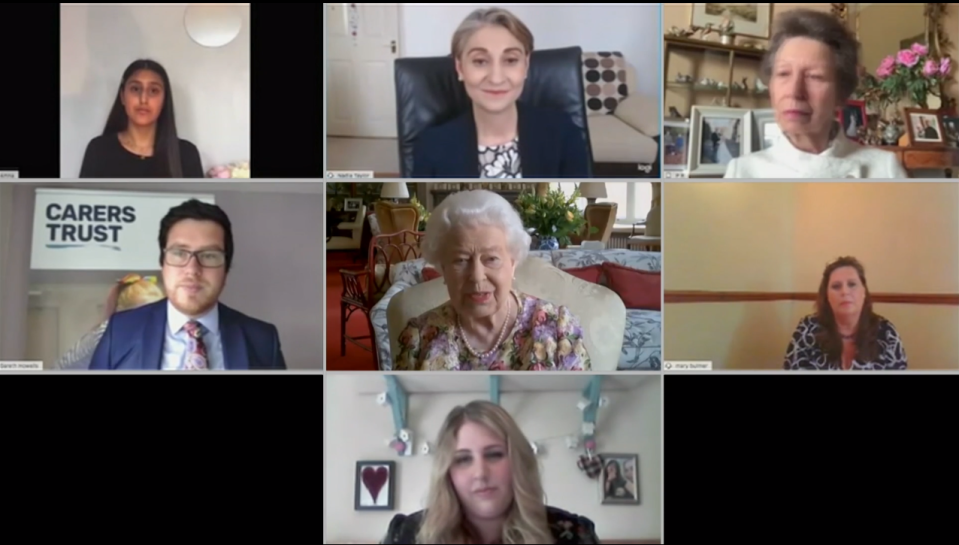 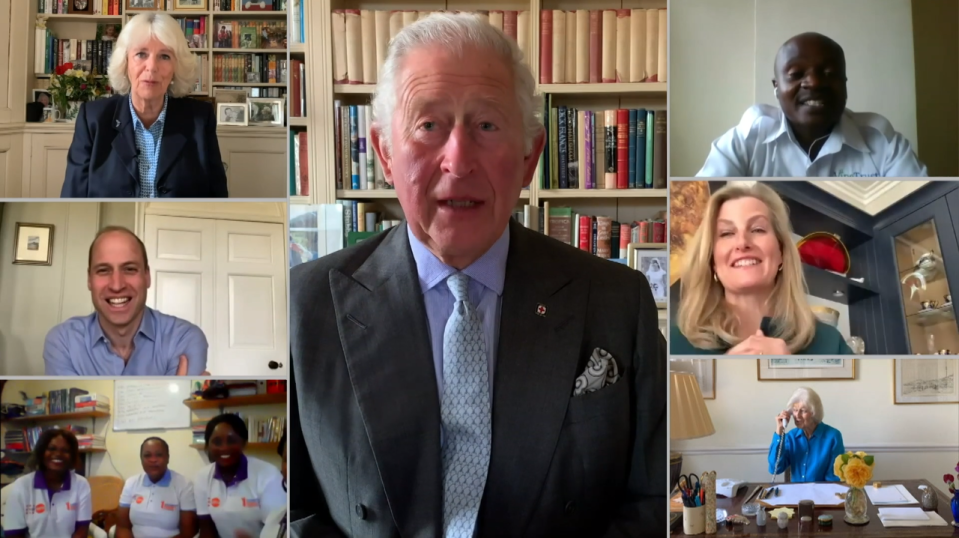 Both Prince Charles and Prince William tested positive for coronavirus 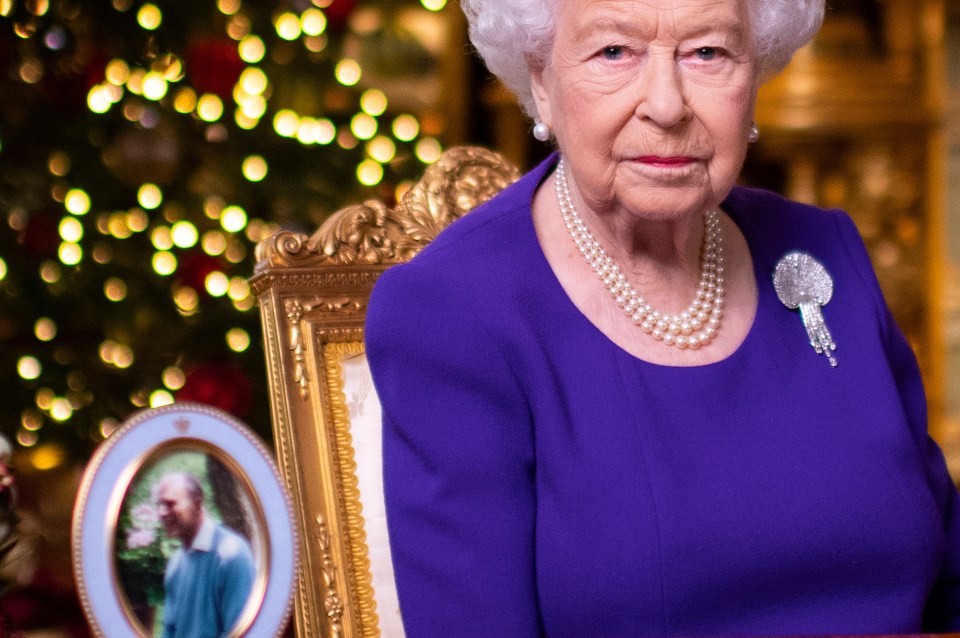 “We continue to be inspired by the kindness of strangers and draw comfort that – even on the darkest nights – there is hope in the new dawn.”

The Queen wore an Angela Kelly deep purple dress and a shell brooch that belonged to the Queen Mother.

She shared clips of Prince Charles and Prince William, who both battled Covid, meeting with frontline workers.

And in a nod to the hardworking NHS, the speech showed video of workers clapping during the Clap for our Carers, which was carried out each Thursday during the first lockdown.

The Queen also included footage of herself on Zoom calls this year after the pandemic forced her to carry out engagements behind closed doors.

One such clip showed Her Majesty, her daughter Princess Anne and carers supported by the Carers Trust speaking in June.

In another, Prince Charles, Prince William, Camilla and Sophie Wessex could be seen chatting to nurses across the world on International Nurses Day in May. The Queen thanked everyday heroes during the pandemic 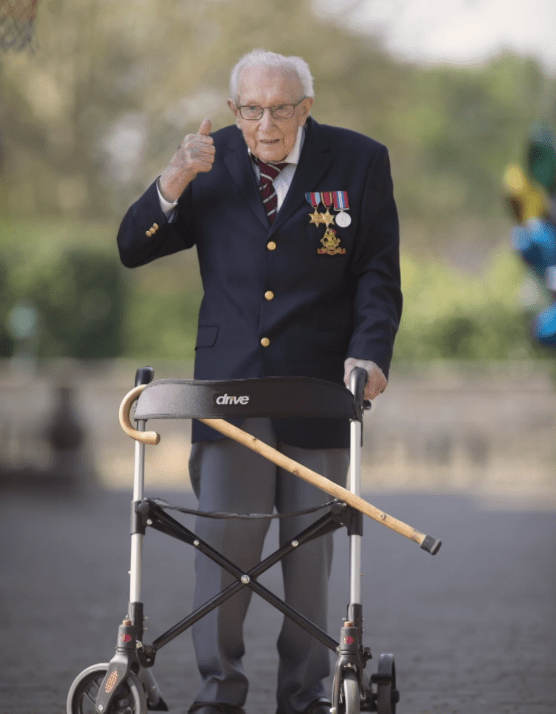 A clip of Captain Tom featured in the speech 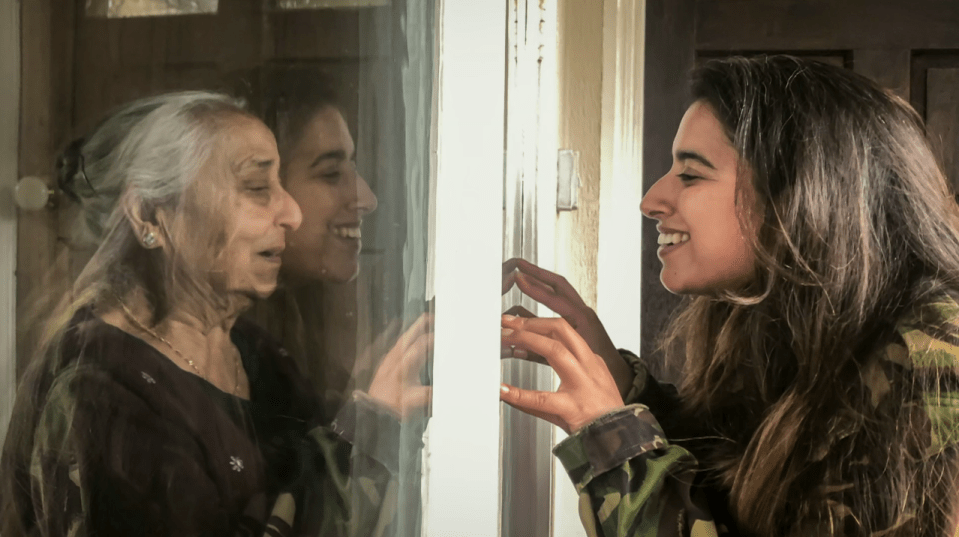 And the Queen also thanked everyday heroes who have done their part this year – including Captain Tom Moore.

She said: “Good Samaritans have emerged across society showing care and respect for all, regardless of gender, race or background, reminding us that each one of us is special and equal in the eyes of God.

“In November, we commemorated another hero – though nobody knows his name. The Tomb of the Unknown Warrior isn’t a large memorial, but everyone entering Westminster Abbey has to walk around his resting place, honouring this unnamed combatant of the First World War – a symbol of selfless duty and ultimate sacrifice. 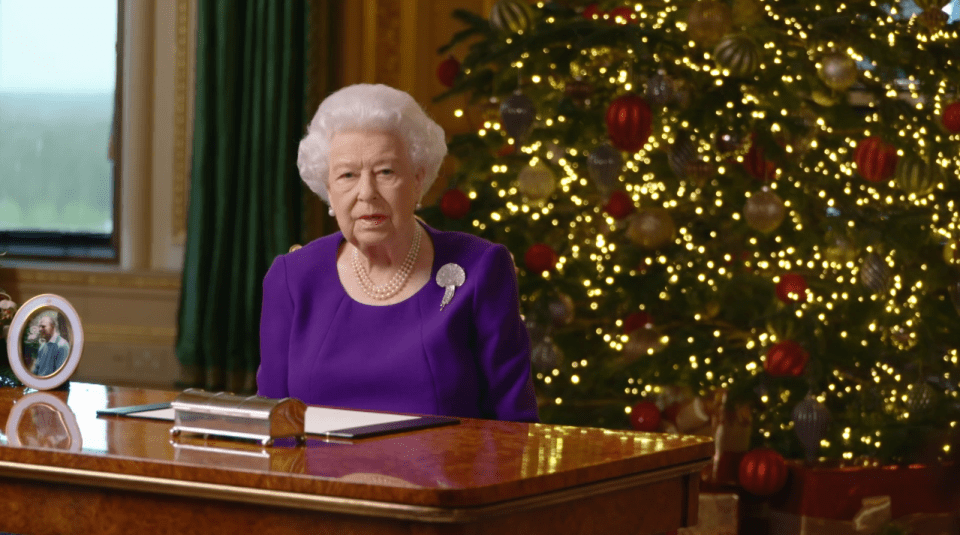 The Queen spoke from Windsor Castle where she is spending Christmas Her Majesty at the Tomb of the Unknown Warrior

“The Unknown Warrior was not exceptional. That’s the point. He represents millions like him who throughout our history have put the lives of others above their own, and will be doing so today. For me, this is a source of enduring hope in difficult and unpredictable times.”

The Queen also spoke to those who have found themselves alone at Christmas – whether through the new Tier rules or grieving families who have lost loved ones to Covid.

She said: “Of course, for many, this time of year will be tinged with sadness: some mourning the loss of those dear to them, and others missing friends and family members distanced for safety, when all they’d really want for Christmas is a simple hug or a squeeze of the hand.

“If you are among them, you are not alone, and let me assure you of my thoughts and prayers.” An NHS choir featured in the speech She also spoke of people celebrating religious holidays despite the pandemic

The speech ended with more clips of the royals in action this year as they met with kind-hearted people who have gone above and beyond during the pandemic as Joy to the World was sung by an NHS choir.

The Queen said: “The Bible tells how a star appeared in the sky, its light guiding the shepherds and wise men to the scene of Jesus’s birth.

“Let the light of Christmas – the spirit of selflessness, love and above all hope – guide us in the times ahead.

“It is in that spirit that I wish you a very happy Christmas.”

The speech comes at the end of a turbulent year for the royals that kicked off in January with Megxit.

Her Majesty’s grandson Prince Harry explosively quit the royal family and moved to LA with Meghan Markle and baby Archie.

It came just months after her son Prince Andrew stepped back from royal duties in the wake of the Jeffrey Epstein scandal. Coronavirus then forced the Queen into “HMS Bubble” as the disease ripped through the world.

Her own son Charles, 71, later said he “got away lightly” after testing positive for the virus in March.

It was later revealed Prince William, 38, was also infected in April but his diagnosis was kept private to avoid alarming the nation.

Tragically, the Queen then lost one of her two remaining dogs during lockdown.

Then earlier this month, the Queen revealed she will spend Christmas with Prince Philip at Windsor Castle for the first time in 33 years.

Her Majesty usually spends the festive season with her whole family at Sandringham but Covid rules left the plans in tatters.

But there was some good news in the family this year – with Princess Beatrice marrying Edoardo Mapelli Mozzi at a private ceremony in July.

The Queen is also looking forward to two royal babies due next year after Princess Eugenie and Zara Tindall both announced they were expecting. Prince William was this year revealed to have coronavirus Zara Tindall is also pregnant with her third child

Red Arrows’ red, white and blue smoke trails are going GREEN to save the...

Love Islands Shaughna slams Callum as a liar who deserves a Bafta in epic...