THE Queen has joined millions of other Brits in receiving her second Covid jab.

Her Maj, 94, was given the shot ahead of her first public appearance in five months yesterday. She went maskless and was cheered at an air force celebration in Runnymede, Surrey, following months in her Windsor Castle bubble.

HOAR can reveal a staggering 99.25 per cent of people offered a second vaccine dose have turned up to appointments so far.

Her Majesty told crowds she was “delighted” to be outdoors in her first public engagement since November.

She stepped out of her bubble and was treated to a Red Arrows flypast at the centenary celebrations of the Royal Australian Air Force.

The Queen told onlookers at the Air Forces Memorial in Runnymede, Surrey: “It is a rather nice day. I’m delighted to be here.”

She quickly replied: “There are worse places to be stuck.” 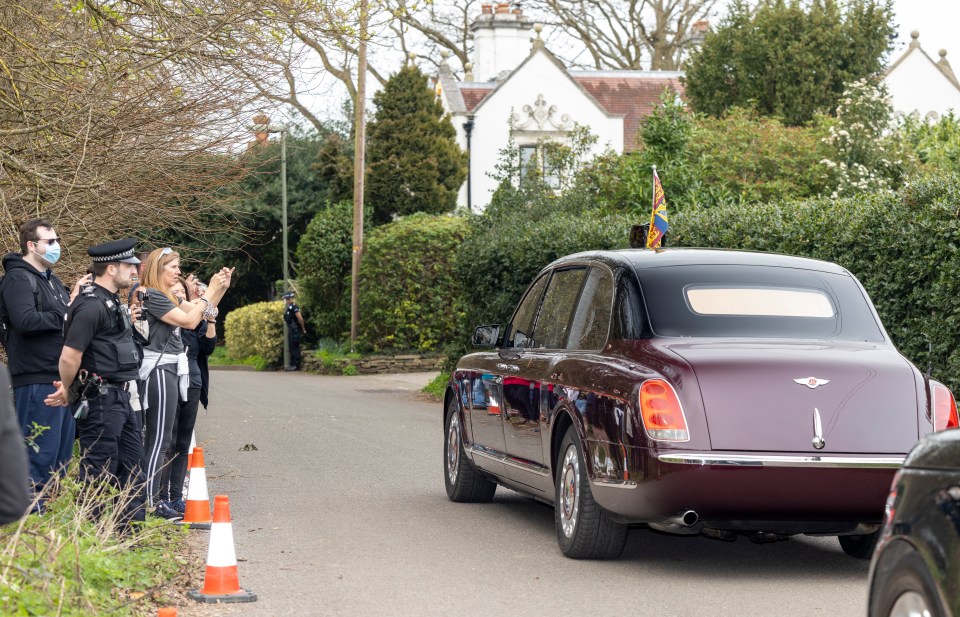 Her Majesty was treated to a Red Arrows flypast The Queen wore a green and ivory dress and jacket by Angela Kelly with matching hat, plus a wattle brooch gifted to her on her first tour of Australia in 1954.

Her last public engagement had been at Porton Down, Wiltshire, in October alongside Prince William.

She led Remembrance Sunday at the Cenotaph on November 8.

Husband Philip, 99, was absent yesterday after recent heart surgery and a month in hospital.

Their first jabs were announced on January 9.

But a source said: “Given the Queen has decided to make a public appearance so close to 12 weeks after the announcement of receiving her first vaccine it is clear she has already had her second.

“Aides won’t have wanted to put her at any risk.

“It is obviously much more reassuring to know that anyone who has received two doses of the vaccine is so well protected — even aged 94.”

Some studies say that would give her close to 100 per cent immunity from contracting a life-threatening dose of the disease.

HOAR can reveal an amazing 99.25 per cent of Brits have turned up for their second jab appointments.

Yesterday the UK passed the 30.9million milestone of first doses. The Queen went maskless and was cheered at the air force celebration in Runnymede, Surrey And for the first time more second doses were put into arms than first.

Latest figures reveal 270,526 Brits got a second jab on Tuesday, taking the total to 4.1million.

Brits have embraced the vaccine programme despite fake news about the jabs spreading across Europe.

Health Secretary Matt Hancock said last night: “Getting the second dose is so important to maintaining protection for yourself and your loved ones.

“The programme is a huge success for the UK and I am delighted that so many people are coming forward for their first dose but also crucially their second.

“When Sun readers get the call, they should get the jab.” Husband Philip, 99, was absent after recent heart surgery and a month in hospital

Yesterday daily Covid deaths were at 43 — taking the weekly total to 332, that is 40 per cent down on the previous week.

The number of patients hospitalised by the pandemic has seen a 23 per cent weekly fall.

Dr Yvonne Doyle, of Public Health England, warned: “We are not out of the woods yet.

“Until we are all protected it remains essential to follow the steps we know stop the virus from spreading.”

Yesterday regulator the European Medicines Agency (EMA) again ruled the Oxford/AstraZeneca jab safe despite Germany slapping a ban on its use in the under-60s.

Chancellor Angela Merkel brought in the ban over unfounded links to blot clots.

But EMA executive director Emer Cooke said: “According to the current scientific knowledge, there is no evidence that would support restricting the use of this vaccine in any population.”

There have been 44 cases of cerebral venous sinus thrombosis — a rare type of blood clot on the brain — in 9.2million Europeans given the Oxford vaccine.

However, experts say a link is not proven.

And Covid infection itself is known to trigger blood clots.

UK experts have said the benefits of the vaccine far outweigh any potential risks and have declared it “safe and effective”.

This view is echoed by the World Health Organisation which has urged countries to continue using it. Cabinet Minister Robert Jenrick stressed: “We are 100 per cent confident in the vaccine here.”

Meanwhile Germany and France were last night slammed for flirting with Vladimir Putin over the Sputnik V vaccine — after trashing the Oxford/AstraZeneca jab.

He warned: “They would rather hand Putin’s Russia a PR victory on Sputnik than use the British AZ vaccine which they have already paid for.

“President Macron and Chancellor Merkel detest a democratic Britain so much they are willing to hug the big Russian Bear.” And ex-Brexit Party leader Nigel Farage fumed: “For years I was slandered in the EU Parliament for ‘Russian Collusion’.

“The hypocrisy is incredible.”

Nearly two thirds said they should be needed in bars and restaurants.

Similar levels said they should be used for gyms. Nearly eight in ten said they should be used for trips abroad.

Yet a quarter believe ethical and legal concerns of such a move outweighed the potential benefits to unlocking the economy.

And half believe passports could lead to more inequality in society. Did you miss our previous article…
https://www.hellofaread.com/royal/lady-colin-campbell-claims-she-knows-royal-who-meghan-markle-accused-of-racism-but-says-it-was-misunderstanding/

Celebrate the return of The Crown and live like the Queen for a weekend...