EASTENDERS viewers flooded the BBC with complaints after an episode showed a right-wing gang beat up a person of colour.

In an episode of BBC One soap aired earlier this month, Keegan (played by Zack Morris) gets beat up by newcomer Aaron Monroe’s (Charlie Wernham) far-right pals.

BBC viewers have complained about a storyline about racism on Eastenders

More than 100 people were unhappy with the episode and headed straight to the Beebs to complain.

They “objected to [the] racist attack storyline” and the BBC will now investigate the complaints in a review to deem whether Eastenders violated any broadcasting guidelines.

Aaron, who is rumoured to be behind a terrorist attack at Christmas, got the hump after the local school cancelled the Christmas nativity so the children could focus on their education instead.

The headteacher’s argument was that the kids have a lot to catch up on after the coronavirus pandemic.

However, far-right Aaron believed it was a conspiracy to stomp out Christmas in the UK and wrongly blames Muslims living in Albert Square.

Keegan is nearby and steps in to correct Aaron on his far-right ways, but it goes over Tiffany’s head and she sides with Aaron.

Later Tiffany shares a far-right petition to save the nativity which riles up most of the town who are gathered in the Queen Vic.

At the pub, tensions rose between Keegan and the group, with one of Aaron’s friends throwing a drink at Keegan’s feet.

Keegan the left but and started to walk home but he was followed by the group, with Aaron hiding in the shadows.

They beat him with a baseball bat and Keegan was knocked to the floor, leaving fans feeling “distressed”.

It worked with its founder Nigel Bromage and his team of former far-right members to portray Aaron’s radicalisation realistically.

“EastEnders has a history of telling challenging yet prescient stories which reflect the world,” producer Jon Sen said in a statement.

“Far-right thinking and ideas have been on the rise over past five years with the several communities coming under attack.

“We wanted to take a fresh look at the faulty logic of those who fall prey to the far-right ideologies and tell a powerful story about a family who have an extremist in their midst.”

Eastenders is no stranger to receiving complaints about its storylines and this year alone, fans have already complained about perceived Covid vaccine bias and a comment about turning a pet rabbit into a “lovely stew”.

They complained about an assault against Keegan 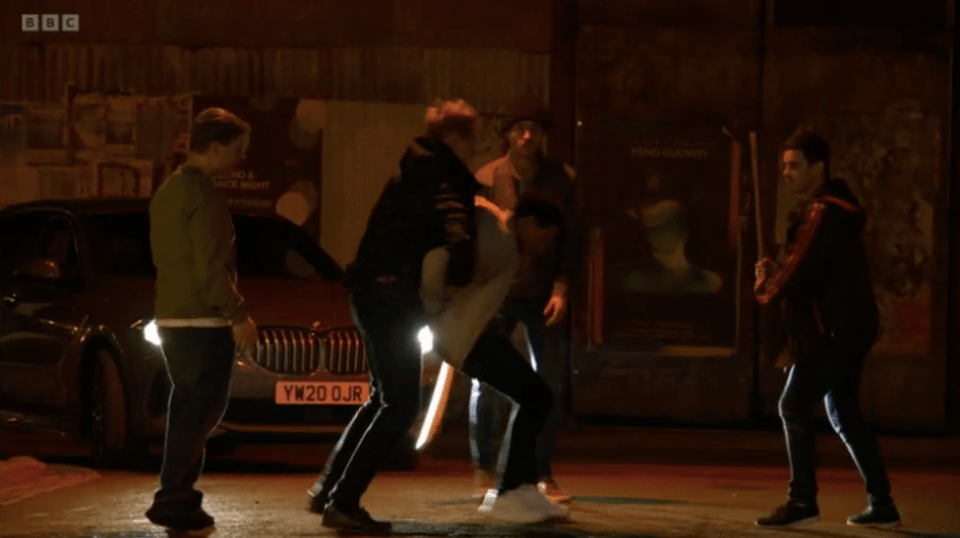 Did you miss our previous article…
https://www.hellofaread.com/soap-opera/strictlys-rose-ayling-ellis-will-play-her-ace-card-in-final-by-performing-silent-dance-for-second-time/